On Friday, April 5th, the Tel Aviv SlutWalk took place and we totally rocked this city! I am so proud of all the hundreds of women who showed up and marched, of the organizers who put their hearts and souls into making it a success, of those who got up on stage and spoke to the crowds about their experiences with rape culture and victim blaming.

I was hoping for the best, but was cautiously optimistic. Rain was expected. There was another organization trying to appropriate the SlutWalk while basing their activities on blatant slut-shaming. Historically, anti-sexual violence marches do not attract huge crowds here. As a matter of fact… This was the largest march I’ve seen! We got good coverage on TV, radio, newspapers, news sites and blogs… So surprising, so gratifying! I’m really just brimming over 🙂

Photos and videos are still being assembled – here is one from YouTube:

This year I decided to organize the Tel Aviv Slutwalk. Last year, the event was sabotaged by the police (and the weather), while this year a non-feminist organization tried to co-opt the Slutwalk to promote their own political agenda… All very vexing, and so I decided that the event would be safer in my radical little hands.

One of the added values my cohorts and I are trying to bring about in this year’s march is to underline how rape culture affects absolutely everyone, but also how voices that are often silenced anyway, are doubly or triply silenced when it comes to sexual violence. So we’ve invited women from all walks of life, from different ethnicities, refugees, trans* folk, people who are discriminated against for being deaf or in a wheelchair or for any other disability, fat women, lesbian and bisexual women, young and old women… And so on – to share a text saying why she needs the slutwalk. We make a poster of it, and put it on the event page. The results have been nothing short of amazing. The images are in Hebrew, so here is just one sample (though you can see the entire album here if you’d like):

As a teen, I need the Slutwalk because the fact that my breasts have developed does not mean that anyone has the right to mention it all the time, or to touch my breasts. Because I’m tired of all the adults around me interfering with my sexual life, and thinking that is legitimate. As a teen, I have not yet entirely learned how to say no, or to run away or protect myself, and I find myself just freezing in shock and waiting for someone to come by and help me.

As a teen, this is my opportunity to learn to say no, before I get used to being harassed.

I usually do not do any type of fundraising on this blog… But today I decided to make an exception. This event is just that important to me. I set up a page for anyone who want to buy a tank top for the event, or just make a donation. So I thought I’d open up the opportunity here as well, on the off-chance that someone here wants to support this effort.

The funds will go towards signage and such, and any leftovers will be sent to our sister slutwalks in other cities.

Donate here, or check out the page with the shirt for sale. Not sure what I would do with international orders for an actual shirt, I guess it depends on the amount of the donation 🙂 The shirt without shipping is about $8-10. So I guess I would send it to you for a donation of $20 and above. Just let me know!

Today, a different round-up. Gender violence is a “pet” topic of mine, so I always want to post about it. But I usually don’t like treating it in a shallow manner, which means a great deal goes unsaid. Recently, there have been lots of discussions about this in my life again, which led to another 30 tabs being open in my browser… So rather than an in-depth post on one topic, I’m including several. Because they were all good enough to stay open on my desktop until I gave in and posted them.

In January, rapper Too Short appeared on XXL, where he gave various bits of advice to boys, regarding girls – including pushing a girl up against a wall and inserting a saliva-wetted finger up her vagina.

Inundated with protests, XXL eventually removed the video from their site, and both XXL and Too Short issued very minimal apologies (too little too late), neither of which actually took any responsibility for statements encouraging violence against girls, or acknowledged the danger of the attitudes underlying Too Short’s statement.

In a society that continues to assert its familiarity with the bodies of Black women and girls… Too Short advising boys to “take your finger and put a little spit on it and you stick your finger in her underwear and you rub it on there and watch what happens… is, unfortunately, not all that surprising; seems more like the status quo for Black women and girls.

He adds that girls and women are not the only ones harmed by perpetuating this attitude:

And this is not simply about political correctness; besides advocating rape and sexual violence against Black women and girls, diatribes like Shaw’s also further criminalizes Black boys, within institutions—our schools—in which Black boys are always, already criminalized.

Neal calls for new strategies other than protest/petition/outrage leading to minimal, too-late apologies and content removal after the damage is done. I’m not sure he has found that alternate solution yet – I’ll be waiting.

Meanwhile, I just found this song — Your Revolution — by Sarah Jones and I found it stunning and somehow appropriate:

Feminist Looking Glass says,
This song is a really clever take-off on Gil Scott-Heron’s “The Revolution Will Not Be Televised.” Sarah Jones sings that “your revolution will not happen between these thighs,” and invokes just about every famous sexist hip hop lyric of the past decade to make her point. → lyrics

Yes, it was a busy week for rape proponents… Huffington Post reports this story from the UK:

The National Union of Students (NUS) has called for the website UniLad, which claims to be the “number one university student lad’s magazine and guide to getting laid” to be pulled down over the article.

In an article titled “Sexual Mathematics” it stated:

“If the girl you’ve taken for a drink… won’t ‘spread for your head’, think about this mathematical statistic: 85% of rape cases go unreported.

“That seems to be fairly good odds.”

The writer then adds at the bottom of the piece: “Uni Lad does not condone rape without saying ‘surprise’.”

Though the article has been removed, the battle is still ongoing on twitter, where women daring to criticize Unilad are verbally abused, including lesbophobic use of the term “dyke”.

Critics point out that the issue is far greater than this one article; that Unilad is filled with misgynistic content that reflects, and contributes to, a corresponding misogynistic attitude on UK university campuses, and largely unreported and unpunished violence against women in the UK as a whole.

And still – the Twitter campaign has made waves, and provided critics of Unilad with a great deal of support. (I found this illuminating article via Twitter: Laurie Penny writes how Uni Lad’s “banter” is based on exclusion. And Another Angry Woman wrote them this open letter, and provided the image below, so funny 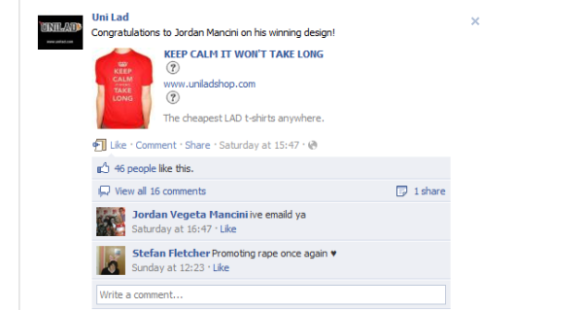 Which just goes to show we need to keep our voices out there. All the time. As frustrating as it often is.

Victim blaming is still all too common. When questioned about who gets raped women answer that women that dress a certain way, act a certain way, drink, are out late, or… are those who get raped. Their assumption is that it is women who are directly or indirectly responsible for the violence perpetrated against them. There are also indications that men are even more likely than women to blame the victim.

See for example the case of the Pennsylvania Liquor Board campaign, which first blames the victim (because she was drinking), then her friends (because “Calling the shots starts with you. What if you didn’t watch out for your friends during a night of drinking?”), and at no point blames the rapist.

Feministing wrote this powerful post about why victim blaming is not a good way to prevent binge drinking.  Some of the points to think about include:

Jezebel’s Erin Gloria Ryan wrote of the ad, “Rape is not just a bad thing that happens to someone after drinking too much. It’s a deliberate act on the part of the rapist, a violation of another person committed solely because the rapist wanted to rape. The sooner we acknowledge this, the sooner we’ll be rid of stupid, finger wagging ads like these.”

Ebony magazine, for one, thinks that enough is enough – that public service ads aimed at women telling them how to prevent rape are misguided and harmful, and that men should be better educated instead.

Holding women and girls accountable for preventing sexual assault hasn’t worked and so long as men commit the majority of rapes, men need to be at the heart of our tactics for preventing them.  Let’s stop teaching ‘how to avoid being a victim’ and instead, attack the culture that creates predators in the first place.

And  in Salon.com, Tracy Clark Flory injects some reality into the dialog in How to Prevent Rape Without Blaming the Victim.

Here’s an ad campaign that gets it:

And then there’s this public service ad from Scotland: 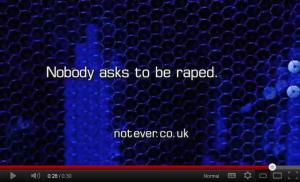 This is one of the most amazing, emotional, difficult, painful, and necessary projects I have ever seen.

About Project Unbreakable, from the project blog:

In October of last year, Grace Brown began a photography project called Project Unbreakable. Grace uses photography to help heal sexual abuse survivors by photographing them with posters that hold quotes from their attackers. Rape survivor and advocate for victims of sexual abuse, Yvonne Moss, describes the project as a way for victims to take the power back of the words that were once used against them.

Grace plans on photographing survivors for as long as she possibly can. Her goal is to spread light, awareness, and healing for those who have been affected.

If you are interested in participating by either being photographed or sending in your own image, you may send her an email at projectunbreakable@gmail.com with the subject line “Photograph Me” or “Submission”, depending on the circumstance.