Trigger warning for extreme racism and violence. I really wish this was in English. I’ve translated parts of this below, but there are some things that no amount of translation will ever get across. This is a screenshot from a Facebook page in Hebrew, called “Death to all Terrorists”. Terrorists, apparently, are any and all Arabs.

These are responses to an image of dozens of bodies of dead Syrians in body bags. This page (and others) have been publishing various images of victims of the violence in Syria, including children. These responses are typical.

Earlier today and yesterday, I was involved in yet another discussion on BDS (Boycott, Divestment and Sanctions upon Israel, a movement calling for cultural boycotts on Israel until they comply with International law regarding treatment of Palestinians and the occupation of Palestinian people and territories). A repeated theme in this discussion is Jews (not necessarily Israelis) who post such statements as “Dear [name of musician], Israel is a peace-seeking nation, and Jews are peace-seeking people! We never start wars, we respect people, we are the victims!” and so on and so forth.

I really want to expose the true mindset in Israel. It is NOT peaceful or peace-seeking. Naftali Bennet, Israel’s Minister of Commerce, recently admitted to killing an unspecified number of Arabs, for unspecified reasons, and declared that is just fine. The people in this post, are not some fringe group. These are regular Israelis, and what they have written here – translated below – are things I hear every day. Everywhere I go. Read through, if you can stomach it, and judge for yourselves.

Now repeat this by thousands of Facebook accounts, groups, cafes, buses, homes, army bases, schools, workplaces…. This is normal Israel, when it isn’t being pinkwashed, whitewashed, propagandized, and spinned.

The Israeli Ministry of Tourism presents a new and highly militaristic, sexist and simply obnoxious campaign for bringing more tourists into the Jewish-Democratic State of Israel, to experience the lush and beauty of Israeli apartheid.

One should wonder who are the tourists that would be persuaded to visit a state that’s so highly militarized, racist and sexist? A state that does not abide by its obligations under international law and who violates the most basic human rights for non-Jews? A state whose most liberal city, Tel-Aviv, boasts at having the highest percentage of military commanders in their municipality’s ad campaign, along with boasting the 92% draft rate of its high school graduates who serve in the army (aka ITF, IOF or IDF). A state whose vast majority is proud of holding ethnic-supremacist ideals, or at the very least think it is ok.

Please choose to stand by the basic rights of Palestinians and insist on their freedom, justice and equality in this land. For more information:http://www.bdsmovement.net/

How fun to see the Internets go wild over the latest Romney gaffe, namely his “binders full of women” comment in the debate:

‘I went to a number of women’s groups and … they brought us whole binders full of women,’ former Gov. Romney said about his search to find more women candidates towork in his Massachusetts cabinet.The term went viral, spawning its own Twitter account and Facebook page.

(Read more in The Daily Beast)

Of course, not only was the ostensibly positive claim offensive…Turns out it was also a lie. 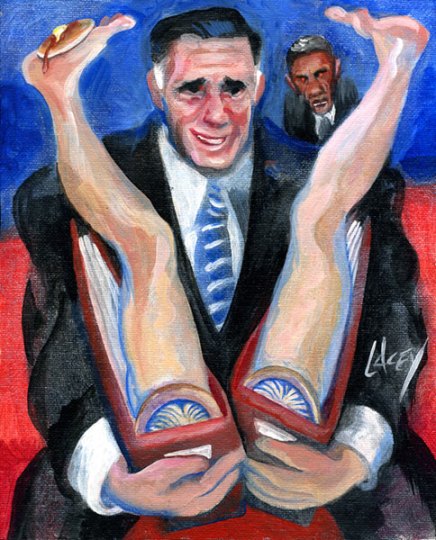 For more fun, check out the dedicated tumblr