D., a 24-year-old student, has reported that the shrink at the National Insurance (Social Security) office in Netanya recommended that she work in prostitution, saying “As a trans woman you can make a living as a prostitute, so I see no reason to give you a Social Security allowance”.

Some factoids: According to reported numbers, about 95% of trans* people in Israel have difficulty finding work, making them possibly the most discriminated populations in the labor market. National Insurance policy dictates that trans* people be classified as having a mental disorder – Gender Identity Disorder (GID) (according to the ICD; the DSM has removed GID from its list of disorders). This means that trans* people can receive living allowances under disability law rather than under unemployment laws.

According to D., the psychiatrist told her that living allowances are for the disabled, and that as long as she has the option of prostitution, she can make a living and therefore is not eligible.

The National Insurance Institute has responded that this their policy includes “sensitivity to special populations” and maintaining the dignity of all applicants, and that they are investigating the complaint.

So, why don’t women know about this? Who benefits from women continuing to carry the primary burden of birth control (or lack of it), even at the cost of their health?

The Best Birth Control In The World Is For Men

If I were going to describe the perfect contraceptive, it would go something like this: no babies, no latex, no daily pill to remember, no hormones to interfere with mood or sex drive, no negative health effects whatsoever, and 100 percent effectiveness. The funny thing is, something like that currently exists.

The procedure called RISUG in India (reversible inhibition of sperm under guidance) takes about 15 minutes with a doctor, is effective after about three days, and lasts for 10 or more years. A doctor applies some local anesthetic, makes a small pinhole in the base of the scrotum, reaches in with a pair of very thin forceps, and pulls out the small white vas deferens tube. Then, the doctor injects the polymer gel (called Vasalgel here in the US), pushes the vas deferens back inside, repeats the process for the other vas deferens, puts a Band-Aid over the small hole, and the man is on his way. If this all sounds incredibly simple and inexpensive, that’s because it is. The chemicals themselves cost less than the syringe used to administer them. But the science of what happens next is the really fascinating part.

The two common chemicals — styrene maleic anhydride and dimethyl sulfoxide — form a polymer that thickens over the next 72 hours, much like a pliable epoxy, but the purpose of these chemicals isn’t to harden and block the vas deferens. Instead, the polymer lines the wall of the vas deferens and allows sperm to flow freely down the middle (this prevents any pressure buildup),  and because of the polymer’s pattern of negative/positive polarization, the sperm are torn apart through the polyelectrolytic effect. On a molecular level, it’s what supervillains envision will happen when they stick the good guy between two huge magnets and flip the switch.

With one little injection, this non-toxic jelly will sit there for 10+ years without you having to do anything else to not have babies. Set it and forget it. Oh, and when you do decide you want those babies, it only takes one other injection of water and baking soda to flush out the gel, and within two to three months, you’ve got all your healthy sperm again.

The trouble is, most people don’t even know this exists. And if men only need one super-cheap shot every 10 years or more, that’s not something that gets big pharmaceutical companies all fired up, because they’ll make zero money on it (even if it might have the side benefit of, you know, destroying HIV).

If this sounds awesome for you or your loved one, get the word out. Share this article. Or link. Or this link. Or this one. Or this one. Sign this petition. Do something! A revolutionary contraceptive like this needs all the support it can get.

UPDATE: A lot of people are asking to be kept in the loop. So here’s the clinical trial/mailing list sign-up from the Parsemus Foundation to get further information about this procedure’s development. And again, please fill out the short non-spam petition to get the procedure funded and keep buzz going.

Reblog from Jezebel A Brief History of Your Period, and Why You Don’t Have to Have It.

Seattle family planning doctor Deborah Oyer routinely asks new female patients, “How often do you want to have your period? Monthly? Every three months? Or not at all?” Until she asks, some don’t know they have a choice. Like every other aspect of reproductive health, menstruation is a fraught topic. A woman who is actively managing her period is in control of her fertility; in Judeo Christian folklore, she is cheating Eve’s curse. Even talking about menstruation can violate taboos. Consequently, most of us are astoundingly under-informed about a facet of womanhood that affects anyone who either has a uterus or loves a person who does.

For example, did you know that: 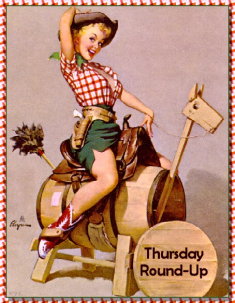 Don’t you just hate when “real life” takes over? Of course, my real real-life is right here… But time is short, so this one is quick and dirty 🙂

Today is all about the ongoing war on women — in advertising, on the street, and in politics. In short, everywhere.

Shall we start off with some patriarchal misogyny in an advertisement? (Shocking, right?) 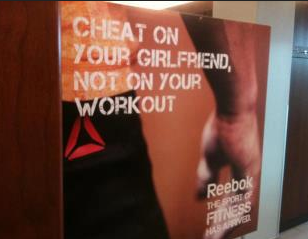 Amy Tennery, in The Jane Dough, writes about this one:

That’s so weird. I had no idea Reebok had zero female customers.

At least it would appear that way.

In a move of promotional wizardry, Reebok has released an offensive ad targeted at men, which reads “Cheat on your girlfriend, not on your workout.” It’s the kind of ad you might see on “Mad Men” — if the executives on “Mad Men” were subjected to sensitivity training from Larry The Cable Guy.

It isn’t clear if the ad is in Germany, or has wider distribution. But a big “Boooo!” to whoever approved it at Reebok.

I am so proud that THREE SlutWalks are scheduled in Israel’s three major cities: The Tel Aviv SlutWalk is today, Haifa tomorrow, and Jerusalem in late April.

Lots of positive reactions: Karin Kloosterman of Green Prophet draws a line between green sustainability and women’s rights. Tinamarie Bernard explains why Slutwalk is good for religious women, too. 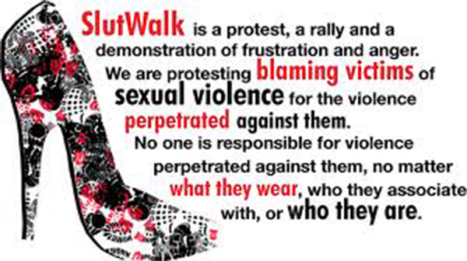 Which doesn’t prevent the media — ostensibly covering the issue of women’s rights and freedoms — from jumping in and objectifying the women. Ansamed, for example, warns that “A horde of half-naked women is about invade the streets of Israel, first in Tel Aviv (on Friday), then Haifa, and finally, even in the holy city of Jerusalem.” Nice, guys. (Nice GuysTM?)

It’s impossible to round up all the woman-hating statements, legislation, videos, speeches, etc. coming out of the United States lately, whether laws allowing doctors to hide health information from pregnant women if they think she might terminate her pregnancy, to enabling employers to fire employees who use birth control, rape by ultrasound, to personhood amendments, to anything Mitt Romney has to say. (No need to mention Rush Limbaugh, right?)

Made me glad to find this:

And Doonesbury gets a special mention here, with a week-long series of the comic strip on the rape-by-sonogram and general humiliation the GOP wishes to visit on women and our bodies.

The American Psychiatric Association wants to add PMS — or what they’re calling Premenstrual Disphoric Disorder — to the next edition of the Diagnostic and Statistical Manual of Mental Disorders, or DSM-5. 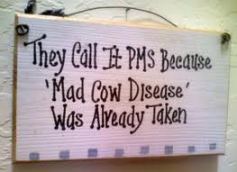 ’cause women are not stigmatized nearly enough by PMS….

Admittedly, when they say it, it sounds kinda worse than plain-old PMS. But basically, what they are saying is that if you feel depressed or irritable or anxious or tense, or otherwise have mood swings before your period starts, you have a mental disorder.

Which essentially means that being a woman who menstruates is pretty much equivalent to being mentally ill.

Could DSM-5 Be Harmful to Your Mental Health?

The DSM, which has never been particularly free of controversy, is coming under increased attack, especially in view of many proposals and modifications that are more and more widely being viewed as detrimental to the health of children, women, and the elderly.

The DSM is a strange kind of double sword: Its largely unscientific definitions can be used as a basis for taking away people’s rights — such as forcing them into institutions, onto medication, stigmatizing them, etc. On the other hand, when they recently redefined what autism is, for example, they ensured that a whole lot of people would now be excluded from being able to receive care.

Among the changes to expect in the next DSM:

In this article, Elayne Clift discusses why DSM-5 might be bad for our health, and talks about the calls to boycott it.

And to a topic that is much more fun… This French documentary attempts to explain the intricacies of the female orgasm, which apparently remains a mystery to many (too many… 🙂 )

And I find it particularly cool that the video was made available for viewing by passengers on Qantas flights!

Until 2009, no one in medicine or science had mapped the human clitoris. (In spite of extensive mapping done of the male sexual organ since the 1970s.) In effect, no one really knew what it looks like, how it functions, or much at all, and that’s the point. Cuz what you can see and probably know as the clitoris is really just the visible tip of quite an amazing organ.

So, this isn’t really a trope. But it’s a cool website in spite of the genderized name: Fametracker’s Hey! It’s That Guy shows you who all those actors are that you recognize on TV but are not famous enough to know their names. Well, it’s an old site, some have become quite famous since…

And many of these actors do represent popular tropes.