Selected posts and articles from the Israel/Palestine frontier. Mostly about women, of course.

Larissa Sansour is an award-winning interdisciplinary artist, who uses Middle-East politics in her work. Sansour was shortlisted for the 2011 Lacoste Elysée Prize, an art competition hosted by the Swiss Musée de l’Elysée, with funding from the Lacoste clothing brand.

The theme of the competition this year was la joie de vivre, and participants were given free rein to interpret this any way they desired. Sansour’s project, Nation Estate, envisioned “a Palestinian state rising from the ashes of the peace process.” The project depicted a science fiction-style Palestinian state in the form of a single skyscraper housing the entire Palestinian population. 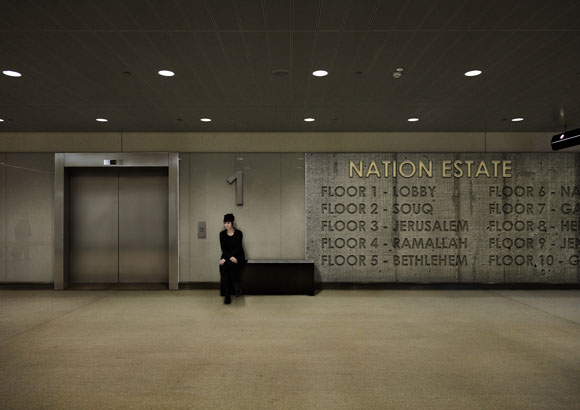 Photographed by Mati Milstein and curated by Saher Saman, the exhibition will open May 25th at Marji Gallery & Contemporary Projects, in Santa Fe, New Mexico

“This is the story of a new generation of radical Palestinian activists who stand out from their society in the most distinct way: they are women. These activists are on the front lines of West Bank protest, they are beaten and face arrest and sexual harassment for their bold role. “ Read more…

Milstein was inspired to do this project by the following analysis by Gila Danino-Yona, on photographic documentation of women in the Arab Spring:

How have women been depicted in these Arab Spring uprisings? Danino-Yonah identified several typical categories.

.Category II – A Woman is Always a Woman

Category III – Thanks to Our Men

The “good” women are represented according to the feminine stereotypes above. But when a woman supports, say, Gaddafi, she is shown ugly, angry, scary, crazed, violent…

But – if you look for them – you will find revolutionary women, too.

Maybe not the typical image shown, but they were certainly there! 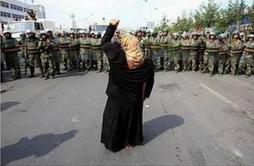 (You can see my personal take on some revolutionary women here)

Reflections of an Arab Jew

This article is by an American, but it relates directly to the Israeli-Arab conflict. One of the major casualties of this conflict is the identity of millions of Jews who are from Arab countries. In today’s political climate, “Arab” and “Jew” are deemed opposites. What does that do to someone who is both? Especially when the “Jew” in that equation is assumed to be European — related to via European literature, humor, art, food, music… That they have nothing to do with?

Ella Habiba Shohat is only the second person I have had the privilege to read on this greatly underrepresented topic, and I am so glad I found this short, but poignant article.

B’Tselem is the Israeli Information Center for Human Rights in the Occupied Territories.

In January 2007, B’Tselem launched its camera distribution project, a video advocacy project, providing Palestinians living in high-conflict areas with video cameras, with the goal of bringing the reality of their lives under occupation to the attention of the Israeli and international public.

In 2011, volunteers in the camera project filmed over 500 hours of footage in the West Bank. The video was edited into two minutes meant to sum up the passing year