Last night, a couple dozens of Border Police and city police raided a closed cafe is South Tel Aviv, where one of the owners and an employee were closing down the kitchen and register. Police forced their way into the business, and attacked and manhandled the proprietor, Orly Chen. Both of the women were arrested. The barrista was released this morning, Chen is still in interrogation. 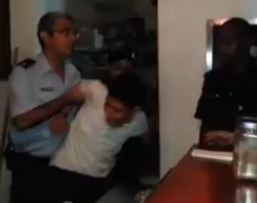 Apparently, a city inspector reported that Alby, the cafe, was open (though it was clearly locked) because a group of “Women in Yellow” (a grassroots group that has organized to patrol the increasingly violent streets of South Tel Aviv, which the police generally avoid and have become particularly dangerous to women) had wrapped up their patrol in front of the closed cafe.

One of the founders of the Women in Yellow is activist Ortal Ben Dayan. And this is where the story begins to make sense: About 1-2 weeks ago, Ben Dayan confronted a Border Police officer who was being verbally abusive to a Palestinian family sitting at the cafe. The officer proceeded to verbally abuse Ben Dayan, and demanded she provide identification. Under Israeli law, citizens have the right to refuse to identify themselves unless they are being detained under suspicion of a crime (and I believe they need to be informed what the crime is). Ben Dayan was clearly not under suspicion, and had no need to identify. The police officer then placed her under arrest, claiming she had “offended a public official”. After a night in jail and some legal ludicrousness, Ben Dayan was found to not be in violation of any law and was released. The officer who arrested her, on the other hand, was surprisingly not let off so easily – after extremely racist statements were found on his Facebook profile, he was dismissed from service.

(I don’t like to link to Ha’aretz, which is a supposedly progressive newspaper that supports rapists, and has recently launched a pornographic ad campaign objectifying women, and also gates their content to paid subscribers – but I’m making an exception here since it is difficult to find reports on these things in English. Hopefully, you’ll reach the non-paid content.)

So, going back to the raid on Alby: If for the sake of argument we accept the inspector’s assertion that the cafe was open – why did an entire caravan of police cars and a couple dozen police show up? Why did the BORDER POLICE rather than the city police take the lead on the situation? This was clearly not a run-of-the-mill business infraction situation. It appears that the association between Alby and the incident with Ben Dayan made it a target (the cafe is a regular hangout for queer and political activist groups, and Ben Dayan runs her own vintage shop next door).

But clearly even the original assertion is completely fabricated. When police arrived the business was locked up, and they threatened Chen that if she did not open up, they would break the glass storefront.

Here are two videos showing the police conduct (including where an officer clearly goes to where Chen is standing behind the counter and grabs her. He apparently claimed she attacked him). The whole time Chen is asking – what am I being arrested for? and receiving no answer. At one point as she is being pushed into the patrol car, the officer near her says “the arresting officer informed you what for”. The video is uncut from the arrest to that point – and at no time is Chen informed what the arrest is for.

As I’m writing this report (Aug 27, late morning Jerusalem time), I have been informed that under a police order the cafe has been shut down for 30 days, for supposed safety violations. As you can see below, every single possible violation has been marked on the form (how likely is that?). Even though I already knew I was living in a state where there is minimal oversight of police and minimal respect for human rights, Israel likes to maintain the *appearance* of propriety, and I really didn’t know that the police could just take away a business’ right to exist with no court approval or intervention.

Update ~2pm Jerusalem time: Police are trying to remove equipment from the cafe. Activists preventing it.

Update ~3pm Jerusalem time: Having faced resistance from the activists and customers, the Riot Police returned with a warrant to remove the business’ computer, under suspicion of “agitation”. How military dictatorship is that? Somewhat Kafkaesque? People are agitated that the business owner is being detained without charge and her business targeted for closure, which retroactively enables the police to seize the cafe’s computer for… agitation?

Activists vowing to block them from carrying this out indefinitely. Also, a protest rally is planned this evening in front of the South Tel Aviv police station. If anyone reading this is in the vicinity of Tel Aviv please come (or at least distribute the event).

Incidentally, Alby is one of the few queer-friendly (and queer-owned) businesses in Tel Aviv, which is virtually the only queer-friendly place in Israel. I invite anyone who is interested in exposing the true face of Israel in the face of the extreme pinkwashing of the Israeli government and allies organizations worldwide to share this and other stories. I encourage BDS activists to us this too: While for some people (like the Tom Jones representatives on Facebook) Islamophobia and therefore abuse of Palestinians may be palatable, the mindset that allows that abuse affects us all, and until we are all safe, no one is safe. And anti-BDS voices certainly use the supposed queer-friendliness of Israeli authorities as a (very poor) counter argument to Palestinian solidarity.

The police closure order on Alby:

Copies of the licenses supposedly lacking:

Some other famous instances of police brutality :