Last month, I organized a remembrance action at the location of the village of Imwas, which was destroyed by the Israeli military after the 1967 war.

The story behind the action is what I think is probably most interesting — you can read the correspondence between me and Mohyeddin, a son of Imwas, in this Facebook note:

This Letter Is 20 Years Overdue

You can also see more pictures, readings, links and responses on the Facebook page I opened for the event.

Report from the Zochrot website, the organization that helped me carry out the event:

Act of Recognition at Imwas Village

On Saturday, May 26, 2012, a group of us went out to create an event at the location where the Palestinian village Imwas once stood.

The background to the event was personal: Twenty years ago I met in the US a Palestinian man named Mohyeddin Abdulaziz. Few months ago I wrote him a letter apologizing for my shabby treatment of him back then, and thanking him for the part he played in my own political development.

He answered me, and told me about the destruction of the village and the expulsion of its residents in 1967. He asked that if ever I found myself in the recreational park built on the location where the village once stood, that I think of him, and of peace, and of justice.
I felt that it was entirely inadequate that I think of this issue only if I happen to find myself at that location. I felt this was an excellent opportunity to connect between the personal and the political, and decided to go to where Imwas stood and make an event of it.

I turned to Zochrot for cooperation, and they offered their guide, Umar, to take us on an excursion to Imwas, and also offered to spread the word about the event.

On the day of the event, we arrived with signs, such as “Imwas is Here” and “Ethnic Cleansing Courtesy of the JNF”. We read some texts we prepared in advance, and did a photo shoot of the signs and building remnants.

Afterwards, when Umar guided us through the village, we called Mohyeddin on the phone so he could be with us as we toured his village. When we managed it, we added video to the call. In his conversations with Mohyeddin, and with the help of a map of Imwas created by Zochrot together with refugees from the village, Umar was able to discern the exact location of Mohyeddin’s home. We took a picture to commemorate the spot, even though there is no sign that a house ever stood there. 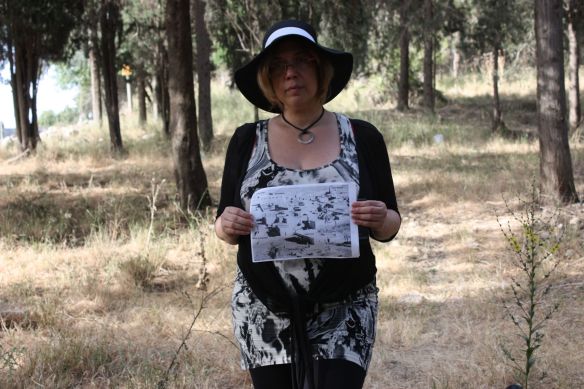 The experience of being there, understanding that there used to be a community, with houses and schools and cafes – made all the more real by the presence of a son of Imwas, who could speak with us and hear us, even if only by phone – was both exciting and upsetting.

Watching people having barbecues there, seeing the few remains of houses, looking at the lists of donors (who undoubtedly were not told the park was built upon a destroyed village)… I, at least, am changed by that day, and it is clear to me that the event is not yet over. That event will continue, whether through additional projects that grow out of the acquaintance with Imwas and Mohyeddin, or if simply because the place and its story continue to live within us. Because as long as we remember it, we have not allowed Imwas to be totally erased.

Read the letters of Tsipi and Mohyeddin and comments on facebook. 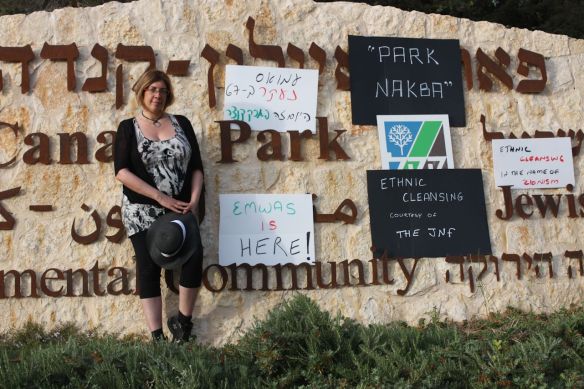