I’m in the mood for some stuff that makes me feel good! 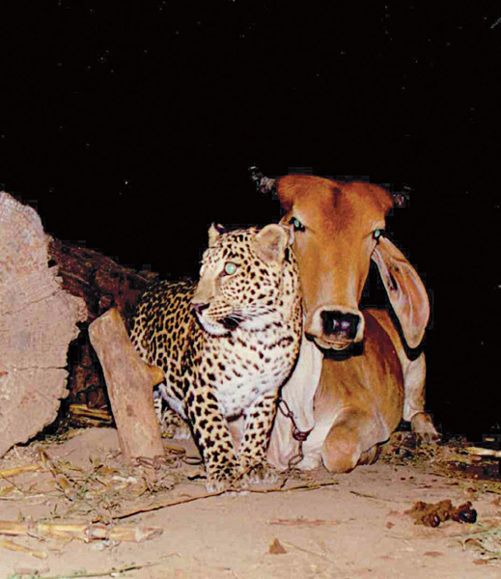 The leopard crept through the sugar cane on an October night in 2002, and found a cow tied in a field, the way villagers keep their livestock in this dusty farming community. The cat didn’t harm the cow, but villagers worried about its predatory instincts, since they, too, were sometimes in the fields at night. They asked the Forest Department to remove the leopard  to a wildlife sanctuary nearby.

And so the trappers came, and soon found themselves observers of an unexpected interaction. The cat returned to the area nightly, but not as a predator. Instead, she came to be embraced. She approached the cow tentatively, rubbed her head against the cow’s head, then settled against her body. The cow would lick the cat, starting with her head and neck, cleaning whatever she could reach as the cat wriggled in apparent delight. If the cow was asleep when the leopard arrived, the visitor would gently awaken her with a nuzzle to the leg before lying down and pressing close. Other cattle stood nearby, but the leopard ignored them. The chosen cow seemed pleased to give the leopard her nightly bath. For almost two months the cat showed up around eight in the evening and cuddled with the cow until the first hint of sunrise.
The cat stayed away for several weeks. Then on the last night the animals were seen together, the leopard visited nine times before wandering away from her friend for good. Rohit Vyas suggests that the leopard had been young and motherless when it first strayed into the village, using agricultural fields as a pathway from a distant forest. The leopard sought the cow’s warmth for a time, but once she reached adulthood, her need for motherly affection diminished. She moved on. Even with such a plausible explanation, “This relationship was unimaginable,” says Rohit. “We were all spellbound by it. Who would expect a carnivore and hunter like a leopard to show love and affection toward its prey?” ♥
Source – The Times Of India & Unlikely Friendships
. 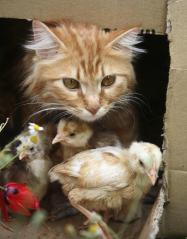 Nimra, a one-year-old cat, plays with chicks in Amman (2007). Nimra took care of seven chicks after their mother’s death. 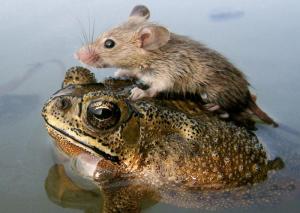 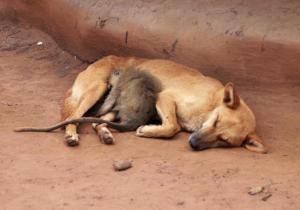 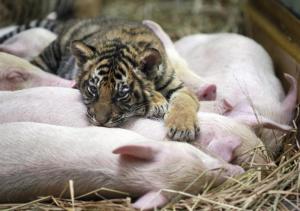 A tiger cub climbs over piglets at a park in Guangzhou, south China’s Guangdong. The tiger cub was abandoned by its mother and was raised by a sow. 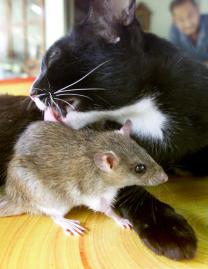 Auan, a seven-year-old female cat,
licks the body of Jeena, a three-year-old male mouse, at a farmer’s house in Phichit, north of Bangkok. Auan found Jeena three years before the photo (2002) and has been his playmate and protector, including warding off dogs, since then.