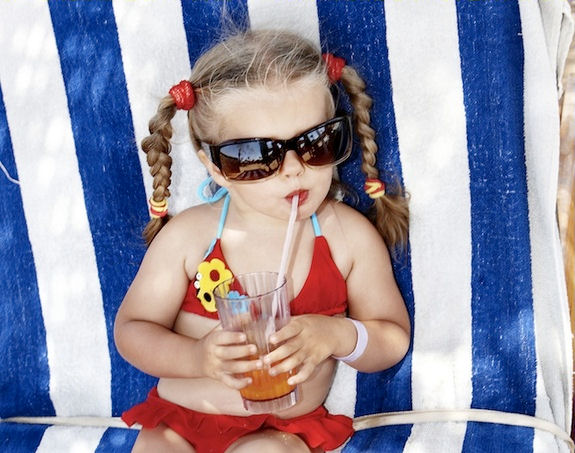 What do you think of thongs for 10-year-olds with slogans like “eye candy”? Underwear for teens with “Who needs credit cards…?” written across the crotch? Tini-Bikinis for toddlers? High heels for 5-year-olds?

Last week I wrote about what Disney princesses teach little girls, and it’s pretty scary. Except that this is only one of a multitude of ways in which little girls are socialized to be partners in their own objectification. Examples include (but are certainly not limited to):

Each of these can be broken down into sub-categories, and I could probably happily spend my life writing a dissertation on each of them if I had the time and resources. Alas, all I have is this blog, but hey, that’s what I started it for. I have a feeling that I can’t begin to do justice to any of the topics in a mere paragraph, so I’ll do a separate post for each.

Part 1: The Lolita Effect, and sexualization of girls in the mainstream media.

In her book, The Lolita Effect, M. Gigi Durham, Ph.D., discusses what pop culture, and especially advertising, teaches young girls and boys about sex and sexuality. She defines five myths that are ingrained in this culture, which make up the Lolita Effect:

She talks about how the mass media undermines girls’ self-confidence, condones female objectification, and tacitly fosters sex crimes. (Here is an in-depth interview.)

I’m sure we’ve all seen examples of this – but how closely are we watching? Little girls are increasingly portrayed in mainstream media and advertising in a sexualized way, and treated as consumers of a sexualized self-image.

Remember in the late 70s early 80s all the controversy around Brooke Shields? At the age of TEN she was photographed by Gary Gross (via Playboy Press) in a series meant to “reveal the femininity of prepubescent girls by comparing them to adult women”. 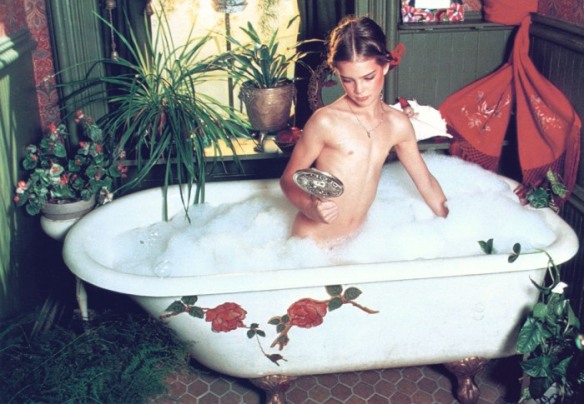 Later, at the age of twelve, she triggered another media frenzy when she portrayed a child prostitute in the movie Pretty Baby. The movie included four Shields nude scenes (note: the original version of the movie with these scenes is no longer available; today’s version on DVD has edited out the nudity).

And later yet, at the age of fifteen, Shields let us know on national television, in no uncertain terms that “nothing comes between me and my Calvins”. Hard to interpret that in a non-sexualized way. 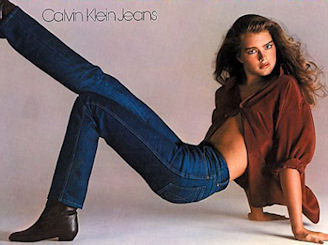 The thing is that back then, this still stirred controversy. Brooke Shields was not in any way mainstream. Let’s take a look at some of what’s being presented to little girls *these* days:

In 2006, UK supermarket chain Tesco marketed this in their online TOYS AND GAMES section with the words: 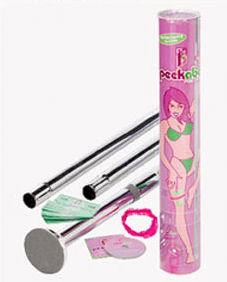 “Unleash the sex kitten inside…simply extend the Peekaboo pole inside the tube, slip on the sexy tunes and away you go!”

“Soon you’ll be flaunting it to the world and earning a fortune in Peekaboo Dance Dollars”.

The store subsequently removed it from the toy section and repackaged it as a “fitness accessory”, but continued to deny that it was sexually oriented. However, Tesco continued to face public outrage due to padded bras and other sexy items it marketed to young girls.

Other UK chains that targeted sexy clothes and underwear to pre-teens include M&S, ASDA, and Argos, while US retailers Walmart, and Abercrombie & Fitch also marketed push-up bras, padded bras, and thongs to girls as young as six years old. French Jours Apres Lunes markets lingerie for pre-teens. And have I mentioned Tini-Bikinis for toddlers? 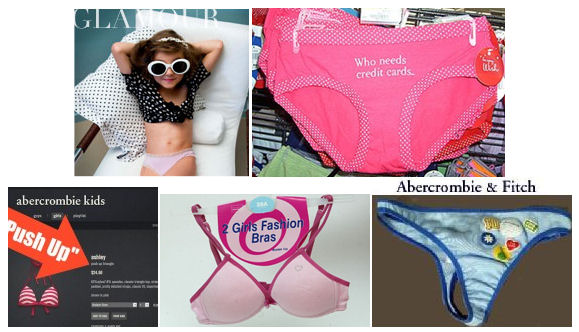 Major UK retailers have since signed on to a government guideline banning such items for children under twelve (12-year-olds can still be sexualized freely). A&F, on the other hand, were pretty happy with the publicity they received (they eventually removed the word “push-up” but left “padded”).

Whether or not public pressure is applied on a case-by-case basis, there is still a very clear truth being outlined here: That there is a MARKET for this. This article suggests that 30% of clothing sold to girls is sexualized. And much has been written on how girls’ Halloween costumes are increasingly sexualized.

The fashion world hasn’t missed out on the party. This ten-year-old model featured in French Vogue in lipstick, high heels, and provocative poses has become the darling of fashion if not of parents:

Finally, lest anyone think that all this is objectionable from “merely” an ideological perspective, or that parents are being “moralistic” when they oppose this, the American Psychological Association concluded in their 2010 task force report that sexualization negatively affects girls and young women across a variety of health domains:

15 thoughts on “The Lolita Effect (Lessons for Girls series)”